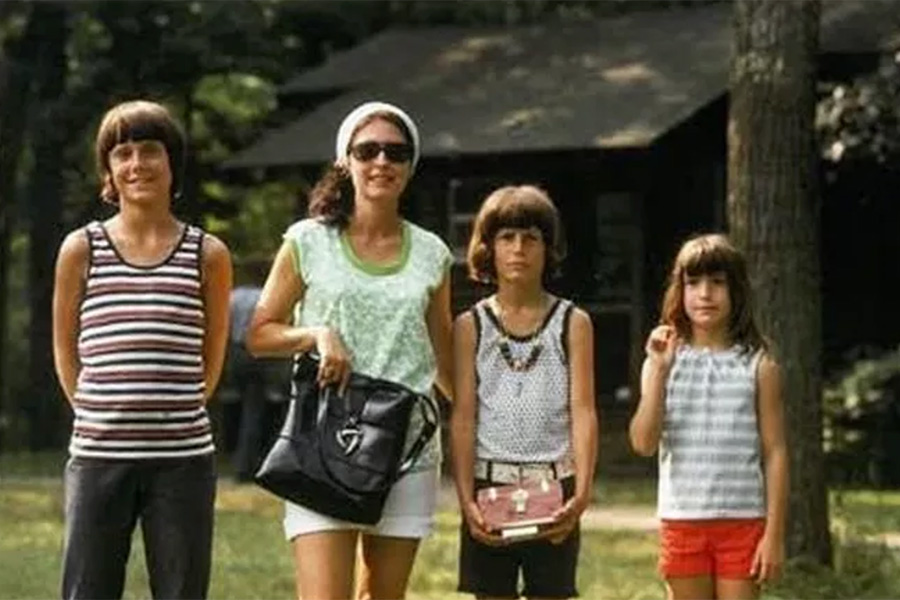 Today is the day we lay Nancy, our beautiful mother to rest. Her tribute…

When I think of our mom, it seems almost impossible to express what she meant to me, our family, and others who knew her. Because with her it is much more about presence, how she made us feel, and words aren’t easy to come by. So, I am using some adjectives and phrases to describe her. Including: classy, sparkle, beautiful, interested, spirited, concerned, argumentative, proud, well-groomed, informed, well-read, creative, sports fan – football, baseball, NASCAR, and golf, appreciative of the world, caring about the disenfranchised, love of nature, love for the beasts and the children, dogs, cats, toys, clothing, and art. 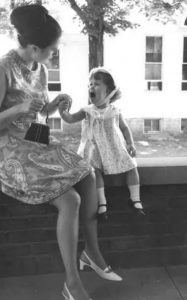 To me, she sparkled. She brought beauty and shine to those she touched and appreciated beauty, like no one else I have known. Nancy was physically quite beautiful as we know. When I was little I remember times men liked to talk to her, and it made me uncomfortable, and later of course I figured out why. She inherited from her father, and other Thomas ancestors, a pride in her appearance. Nails were always manicured. Hair neatly combed and often pulled back. Her clothing was immaculate, and she took care of them so well. Her boxes of shoes contained wrapping around the shoes, so they wouldn’t touch.  This beauty and pride in her appearance was of course both a blessing and a curse because as she aged and lost her vision, her ability to manage this was difficult. I remember sitting in the waiting room at her eye specialist and a woman came up to her and said, I just want to tell you how beautiful you are (she was late 70s at the time). Nancy took the compliment from the woman, then she said, “Thank you, but I don’t know what I look like anymore”. That was tough to hear, so I whispered to her and said, “Mom, I told you so, you really are still quite beautiful.” Many of you have used the word classy to describe her, and looks played a part, however this class extended to her behavior and her outlook of the world.

Nancy really cared about what was going on in the world and knew more about current events than many. She subscribed to Time magazine which she would study with her magnifier until she could no longer see to read. She taught her children to care. On April 17th, 1970, when I was 3 ½ years old, she made me stand in front of the TV as Apollo 13 was about to land – and told me to pray for the people in the capsule and that they make it back to Earth safely. I stood there with her and watched it fall through the sky. I remember the Viet Nam War, Watergate, and so much more than others my age do. Because of both of Chuck and Nancy, we knew about race issues, never to use racist words, because that would be unkind to our fellow humans. In her mind, people who didn’t care about others’ plights were evil. And she used the words, “That evil man”, when she didn’t like someone.

Children and animals were of the utmost importance. She painted birds, with details of their wings, dogs with their expressions, cats, deer, birds, rabbits, bugs. She had books and cut-outs from magazines about the animals and about plants, so she could paint them accurately to their species. She loved all of her dogs and cats and considered all of her children’s animals her fur grandbabies. Nancy became a vegetarian later in life, partly for health reasons as she gave up smoking and focused on diet. But mostly she hated to eat animals anymore.

Creativity was always present. Her handwriting was gorgeous, her paintings detailed, her crocheting and sewing, with straight lines, she made all of my dresses when I was little, she could cook like a gourmet – we typically had cold cereal for breakfast, and sandwiches for lunch, but dinner was always planned and something special. She used herbs and spices before they became so popular.

She decorated for all of the holidays, and made them special – Christmas of course, but would put some effort into the less popular ones, like St. Patrick’s Day and Valentines. She was aware of clothing designers, jewelry designers, where gems came from. She was a gardener, with the best roses in town – knew how to keep the pests away and taught herself the Minnesota trench to preserve the roses through winter. She was self-taught, a regular at the library reading on how to make and do things. Later an avid purchaser of books – I think she ready around 2 or more books a week. Many were romances, yet she read classics, poetry, newspapers, and magazines.

Her love for her family – she was I think unusually close to her 3 children. Really, she was mom, but as Andy has said, “she was my best friend”. She supported us through so many difficult times and was always saddest when we were at our worst, and happiest when things were going well. All 3 of us called her a lot. I think for all 3 of us, one of the hardest things to adjust to is not being able to call her.

Her grandchildren – well Nick was the first, and as I was such a young mother, her support was so valuable. She stayed with me when Nick was born, helped us buy clothing and supplies, slept at our house countless times to sit with Nick while we worked late nights in the restaurant. She always made it so special for Nick, with a candy supply, toys, books, and of course the movies. Nancy loved films. I remember her dancing with Nick to Mary Poppins, then moving into Labyrinth, Lady Hawk, the Princess Bride – then migrating to Aliens, and much to my chagrin, the Silence of the Lambs. Wow. She attended many of Nick’s baseball and hockey games, and I think almost all of the Rocori High School Football games. She was so proud of how great he was, one game in particular, when we were in Little Falls, she and I drove together, and Nick just kept on tackling – she was thrilled.

Beau’s experience was different so many years later, we weren’t so poor, and she helped design his nursery (along with a new bedroom for Nick at the same time). She painted bugs on the dresser, birds around the windows, stars on furniture. She lived and helped raise Beau for 9 years in our house, while we were working, putting up with boys coming in and out of the house, opening the frig, climbing on the roof, snotty behavior at times, and keeping them from breaking things (only 2 things were broken, that we know of). A lot of what they did – she didn’t even know about! She loved watching Beau through his football career as well, she loved the Becker boys – Beau’s friends and teammates, and the parents all knew her. She would get out by the field even when she couldn’t see, and just listen or bug Scott and I to tell her what was going on. I will never ever forget her at a Becker football game, one of her last when she could barely get into the stands, Scott carrying her out, her lap in his arm, and down the bleachers in front of thousands of people. It was like a scene from a movie. Scott, I will never forget that.

Morgan Elizabeth, what a gift to get a granddaughter with her middle name! Nancy didn’t get the time sitting for Morgan as she was sick at the point Morgan was born, however, she marveled in Morgan’s sweet personality. Her loving demeanor, heart, calmness. Her cuteness. She loved you so much Morgan, as did Grandpa Chuck, and she knows how much you love her.

Randi and Jacqueline, her step-granddaughters. She considered you her grandchildren, loved you. Randi she held you when you were little and celebrated many holidays with you. Jac shared a memory that her most favorited times with Nancy are the visits with her when she was alone. They talked for hours and how excited she was last year when Jacquelyn and her date showed up at her place all dressed up for prom. Jac – we heard a lot about that, she cherished that memory as well.

Nancy adored her parents, her mom’s sense of humor, and friendship as Elizabeth smiled and laughed a lot. Her father’s strength. She told me she thought about them every day – she inherited so much from both of them.

Roxanne, she adored you and felt you are the best possible partner for Chip. She appreciated your heart, responsibility, common sense. Some words about Nancy on behalf of Roxanne:

Scott, she considered you her son. She said she had 3. I will never forget when she was in the hospital after she had her stroke, and her just holding on to your arm and how much she loved you. We would have never made it through without you. There aren’t too many people who would let their mother-in-law live with them for nine years. Thank you, in so many ways you saved our lives and were a caregiver as well.

Nancy loved our friends, those we have today, and mine while growing up, Shelly, Barb, Sonja. Shelly and Nancy would talk for hours about relationships, boys, current events, and books. Barb about anything creative, they worked together in creative pillows and products out of vintage fabrics which my mom sold in her store and Barb in her design business.

Since her memorial is outside and we don’t have music, I would like to read for you a verse, that reminds me so much of Nancy and how she felt. It was sung by the Carpenters in the 1970’s:

Thank you to all for coming, the Thomas Family who she loved deeply, the Pauly family who welcomed her into their home so many times and she was so grateful, to all other friends and family.